The following models have been found to support Passpoint, according to our tests using "actual" devices.

Unfortunately, Passpoint isn't always supported on the actual devices in the market even if the products are marked with Passpoint-certified. :<

In the following list, only the basic Release 1 capabilities are tested unless otherwise mentioned.

There's no warranty of any kind. The list is provided "AS IS."

Passpoint is found to work on the following models, i.e., in this AC generation (not newer).

After upgrading the controller to 6.x, the  AP needs to have firmware 4.x or newer. However, in order to use Passpoint, beta firmware 5.x is needed, i.e., the combination of 6.x controller and 5.x AP works.

The 5.x beta firmware is available at https://community.ui.com/releases (login required).

The following models have been found NOT to support Passpoint so far.

The controller on UDM shows "HOTSPOT 2.0 [COMING SOON]" but the meaning isn't clear at the moment. 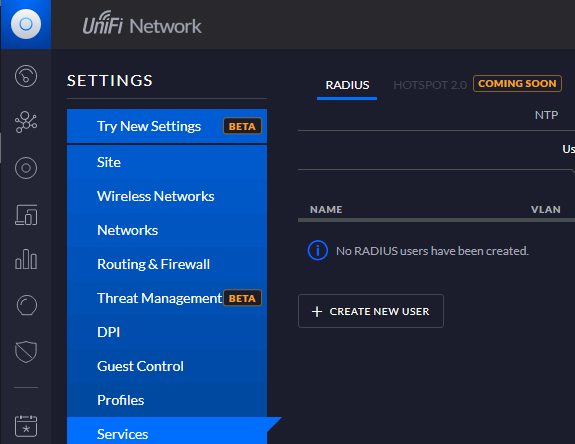 The affordable Aruba AP 200 series support Passpoint. We've spotted the following models. There's no GUI for Passpoint configuration. CLI operation is needed, and the configuration is more complex compared with that of Ubiquiti and Meraki.

Aruba Instant On series doesn't support Passpoint at the moment. There's no configuration menu for Passpoint.

Passpoint support is still in beta phase as of this writing. We've found the following models work. You cannot expect too much.

I cannot say "affordable" but having a Meraki AP as a reference is recommended if one wants to work with Passpoint.

That's because small APs are required for Passpoint adoption in small-/mid-sized businesses. For example, a small cafe wants to provide a nice Free Wi-Fi service using an inexpensive AP. If Passpoint APs were all expensive, venue owners won't subscribe to a Wi-Fi solution with Passpoint / roaming and they would continue using insecure open Wi-Fi only.

Another reason is that inexpensive models can provide engineers with good opportunities for trying and learning the Passpoint system. It's quite important to have a large number of engineers who become familiar with new technologies;, not only Passpoint but also Wi-Fi roaming.

Please let me know if you found any other affordable models.